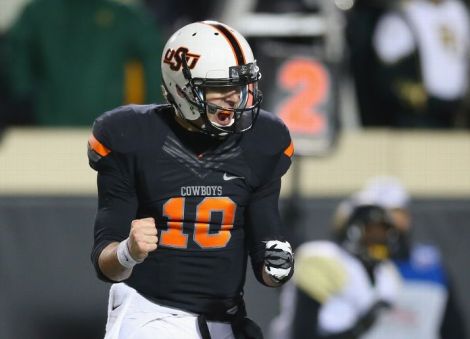 STILLWATER, OK – NOVEMBER 23: Clint Chelf #10 of the Oklahoma State Cowboys celebrates a touchdown against the Baylor Bears in the third quarter at Boone Pickens Stadium on November 23, 2013 in Stillwater, Oklahoma. (Photo by Ronald Martinez/Getty Images)

The Oklahoma Sooners were the first team of the two bedlam opponents to get their game underway on Saturday. The Sooners took on the Wildcats of Kansas State, and were 5 point underdogs by kickoff.

Redshirt Freshman Quarterback Trevor Knight solidified his starting role with the Oklahoma after his stellar performance against the Wildcats. Trevor Knight made multiple plays with his legs that Oklahoma fans haven’t seen in quite some time.

The rushing attack, led by Brennan Clay, was maybe the most impressive it has been all season. The offensive line led by senior Gabe Ikard controlled the line of scrimmage from the first snap, to the final kneel.

The defense of the Sooners was lit up by the Kansas State passing game, led by the quarterback Waters. The receiving attack for the Wildcats was led by Tulsa native Tyler Lockett. Lockett caught a whopping 278 yards on 12 catches, and scored three touchdowns on the Oklahoma secondary.

All eyes were on Stillwater on Saturday, however, as the #10 Cowboys took on the #3 Baylor Bears.

ESPN’s flagship program College Game Day was in Stillwater to take part in the all day festivities that lead up to the big game.

A frigid 20 degrees at kickoff didn’t seem to effect the Oklahoma State Cowboys as they got off to a quick start.

The defense of the Cowboys seemed to be more ready for this game than they ever have been, holding the Bears to only 3 points by halftime. Before the game on Saturday, Baylor was averaging just over 60 points a game.

Going in to the game the Cowboys knew they needed some big plays from the defense, but I don’t know if anyone expected them to play that well.

Oklahoma State ended up allowing just 17 total points to Baylor, their low for the season.

The offense of the Cowboys worked something like a well oiled machine as they racked up 49 points on an underrated Bears defense.

Cowboy senior Clint Chelf had a great game racking up 370 yards through the air, and a total of four touchdowns.

Both the Sooners and the Cowboys look like they’re playing some of their best football of the year going in to the Bedlam game.

The Oklahoma Sooners will come in to Stillwater as underdogs, and the Big 12 Conference Championship will be on the line for the Cowboys, which makes for a massive game in Oklahoma.